Report from Attune: Keys to Manifesting Attune, a four-day wellness immersion to support people on the path to optimum health, was held November 8-11 at Serenbe in Chattahoochee Hills, GA. Its keynoters were authors Gabby Bernstein, Dr. Joe Dispenza and Elizabeth Gilbert.

The event was produced by Living Wholly of Los Angeles, an event company founded in 2013 by Jenny Emblom. After a four-month stay at the Optimum Health Institute in San Diego to address ovarian cancer, Emblom says she created Living Wholly as a way to stay educated about health and wellness practices and to “create a new way of socializing.”

Before producing Attune, Emblom held smaller monthly events in Los Angeles. Once she helped produce a four-day event for another organization, Emblom saw how much deeper attendees can go with longer events.

Her primary motivation behind producing Attune was to prompt people “to understand what is available for them,” says Emblom, “and how they can implement this [information and practices] into their lives. They can make a change in their own consciousness and literally shift the trajectory of their lives, which, in turn, elevates the planet. The real ‘why’ here is to support the evolution that’s happening in the collective consciousness.”

Emblom, a native of Alabama, chose Serenbe to hold Attune because she wanted to locate her flagship conference in the South and make an impact in a region that’s not typically known for wellness gatherings. She also felt it was essential for the event to be held in natural surroundings to give attendees an optimal experience.

Some 40 percent of Attune’s 650-700 attendees were from Atlanta, but attendees hailed from all over the world, including Central America, South America and Europe.

What follows is a recap of two of the three keynote addresses at the event, from author and motivational speaker, Gabby Bernstein, and international lecturer, corporate consultant, and author, Dr. Joe Dispenza. A recap of Elizabeth Gilbert’s talk will appear in next month’s issue.
Two of Attune’s keynote speakers—authors Gabby Bernstein and Dr. Joe Dispenza—spoke about a topic of keen interest to many, if not most, human beings: how to manifest or create what we want in life.

Yet to discuss the subject, they used very different languages.

On the one hand, Bernstein shared personal stories and provided a few tips that she formulated from her life experience. Dispenza, on the other hand, spoke in the language of science. Still, his own life experience also provides insights and inspiration. As a 20-something, he overcame a devastating spinal injury as a result of being hit by an SUV during the cycling stage of a triathlon. Instead of heeding the advice of his doctors and undergoing radical surgery, Dispenza healed himself with his mind.

The biggest challenge that people have when trying to manifest a desired outcome is to generate and maintain the emotional states that reflect success—before success actually occurs. In other words, one needs to feel rich before abundance appears; one needs to feel healthy while still suffering through health issues; one needs to feel loved and adored as if in an intimate relationship without the prospect of such a relationship on the horizon. Both speakers addressed this issue, each in their own way. 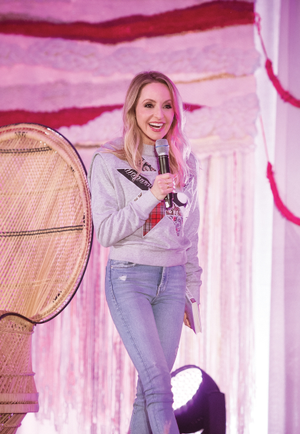 Gabby Bernstein kicked off the Attune conference with her talk, “Super Attractor,” which is also the title of her latest book, just released in September.

Bernstein shared the results of an informal poll of her Instagram followers: 96% believe they are blocking their own manifesting powers. Then she listed the ways in which people block that power: by being manic, by pushing, by judging, by holding on to fear. What all of these behaviors have in common is that the emotions associated with them do not feel good.

She describes “Manic Manifesters” as people who do everything—meditations, mantra recitations, yoga, and more—and then get discouraged due to a lack of tangible results. The problem is that manic activity levels do not feel good.

Pushing has a similar energy, except that pushing actions consist of those that fit more on a to-do list, rather than specific and direct manifesting activities such as meditation.

Judging, too, does not feel good.

“The secret to feeling good is to decide to stop feeling bad,” she says.

To overcome blocks in our ability to manifest, Bernstein recommends her three-step process, the Choose Again Method.

The first step is to notice when a negative thought arises. The second step is to forgive oneself for permitting the thought to arise. If self-forgiveness itself is challenging, then Bernstein recommends forgiving the thought.

The third step is to choose again. “This is when we reach for the next-best feeling thought,” she explains.

Bernstein acknowledges that this step is not always easy to do. She advises that we focus on making incremental progress and avoid trying to jump from despair to joy in one fell swoop.

To manifest effectively, Bernstein recommends that we get out of our own way, generate higher-vibration feelings, and making sure that our actions are spiritually aligned. She says, “make sure your desire is backed with love and service.” After that, she advises that we strengthen our faith.

“Trust in the Universe; trust in a higher power; trust in a Presence beyond your own guiding of things. And really believe that your desire is being taken care of. It’s important to know that manifesting isn’t about having total control, or satisfying all your short-term desires,” says Bernstein.

“True manifesting isn’t even about getting what we think we want. It’s about receiving what is the highest good for all. Remember, your plan is not always the best plan. When you surrender to the art of manifesting, you can trust that Spirit is guiding you towards your desire and much more.”

How We Get Stuck

Whereas Bernstein talks about the negative feelings that constitute manifestation blocks, Dispenza spends a significant amount of time explaining how those negative feelings became so firmly established in the first place. And whereas Bernstein instructs the audience on how to use the conscious mind to choose again, Dispenza talks about how meditation can be used to reprogram the subconscious mind.

“Ninety-five percent of who we are by the time we’re in our mid-thirties is a set of automatic behaviors, unconscious habits, automatic emotional reactions, hardwired attitudes, beliefs and perceptions that are functioning like a computer program,” says Dispenza.

He explains that when a person has an experience, the physical manifestation of that experience consists of the chemicals that are generated as a function of it and that those chemicals are referred to as feelings and emotions. He says, “when you repeat any experience over and over again, you’re going to neuro-chemically condition your mind and body to begin to work as one. And when you’ve done something so many times that your body now knows how to do it better than your conscious mind, now it’s second nature, it’s who you are.”

In other words, what was once conscious, becomes unconscious. Or, more accurately, it becomes part of one’s subconscious mind. Will and control are no more.

How We Become Someone Else

Dispenza said that he usually eschews keynote speeches because he’s far more interested in generating results for people, which he does best through lengthy workshops and retreats. And those events largely consist of a variety of meditations.

Dispenza uses meditation to get people into the quantum field, which is where thought energy manifests into matter, sometimes instantaneously. Dispenza himself meditates for two hours first thing every morning.

“Can you believe in a future that you can’t see or experience with your senses yet, but you’ve thought about enough times in your mind that your brain is literally changed to look like the event has already occurred? Is that possible? The latest research on plasticity says it is,” explains Dispenza.

“You can select a new potential in the quantum field and begin to emotionally embrace that future before it’s made manifest to such a degree that your body, as the unconscious mind, does not know the difference between the real experience producing the emotion and the emotion that you’re fabricating by thought alone,” he says.

Dispenza claims that he can teach people how to enter the quantum field and start reprogramming the subconscious mind and the autonomic nervous system. “You can’t pass through [the door to the quantum filed] as a somebody,” he says, “you can only pass through as pure consciousness.”

“If you teach a person to create from the field instead of from matter, you no longer play with the rules of Newtonian physics,” says Dispenza. “In fact, you don’t have to go anywhere to get it, because when there’s a vibrational match between your energy and some potential in the future, you will begin to draw the experience to you. It will happen in no time because you created it in no time. Something will appear out of nothing because you created it from nothing.”

That’s how Dispenza and others explain spontaneous healing: in the quantum field, change occurs via electrical energy, not chemical processes. “[That energy] is orderly. It’s highly quick; it’s very coherent; it’s very powerful. And the autonomic nervous system is what’s regulating your heartbeat, controlling your hormones, your enzymes, your blood sugar levels, your body temperature. And a person gets some biological upgrade in one second. All of a sudden, the rash is gone, the tumors are gone, the vision changes, the hearing changes, the person’s leukemia goes away in one second.”

For Dispenza and others who share his perspective, there are no unexplained miracles; behind every effect is a cause. And the cause behind manifestation is the quantum nature of reality.

“Science is the contemporary language of mysticism,” says Dispenza. “It is science that demystifies the mystical. And if you can combine a little quantum physics with a little neuroscience, with a little neuroendocrinology, psychoneuroimmunology, the mind-body connection, a little epigenetics, electromagnetism, all of those sciences point a finger at possibility.”