At the intersection of yoga and Taoist philosophy rests a unique type of yoga asana practice known today as Yin yoga. The Taoist principle of “yin and yang” insists that everything in the known universe exists as inseparable and contradictory opposites, such as male and female, dark and light, or sun and moon. The two opposites attract and complement each other, and each has within it an element of the other—as the yin/yang symbol above suggests. In this model, the yin element is feminine, dark, slow, watery, earth-bound, lunar, diffuse and passive. Yang, on the other hand, is masculine, bright, fast, fiery, ethereal, solar, focused, and aggressive.

Most of our Western yoga practices can be characterized as yang. Renowned Yin yoga teacher and anatomist Paul Grilley says, “Analyzing various yoga techniques from the perspective of yin and yang, the most relevant aspect is the elasticity of the tissues involved. Yang tissues like muscles are more fluid-filled, soft, and elastic; yin tissues like connective tissue (ligaments, tendons, and fascia) and bones are dryer, harder, and stiffer. By extension, exercise that focuses on muscle tissue is yang; exercise that focuses on connective tissue is yin.” Any time a yoga practice prioritizes flowing, energetic, muscular movement, it can be considered yang. When a practice emphasizes stillness and passivity, it is usually yin.

Tradition suggests that yang reaches its greatest influence at the time of the summer solstice, and yin reaches its peak at the winter solstice, making this month, December, the perfect time to explore the deep stillness of a Yin yoga practice.

What is Yin Yoga?

Yin Yoga is an introspective and meditative practice. Postures, which are primarily floor-based, are held for long periods of time, averaging approximately five minutes in order to stimulate the flow of energy through the body’s subtle channels. These are known as nadis in yoga, and the energy is called prana. In Chinese medicine, they are referred to as meridians and chi, respectively. The poses apply stress to the dense connective tissues of the body to increase circulation in the joints and maximize flexibility.

What is the Origin of Yin Yoga?

Long-held postures have been practiced in Hatha yoga and Chinese Taoist yoga for centuries, but most people attribute the Yin yoga we practice today to martial artist Paulie Zink who taught what he called “yin and yang yoga” to his students in the 1970s. He continues to refine the practice even today. In the 1980s, Paul Grilley studied with Zink and combined Zink’s methods with anatomy and Chinese meridian theory to create sequences that worked in ways much like acupuncture—with the aim of purifying lines of energy in the body. One of Grilley’s students, Sarah Powers, further refined and codified the practice and suggested the name “Yin yoga.” Together, Powers, Grilley and Zink began to offer Yin yoga teacher training courses in 2009, making the technique widely available throughout North America and Europe.

How is Yin Yoga Different from Hatha Yoga?

Whenever we move in any type of yoga practice, both muscular and connective tissues are involved. Most Hatha and Vinyasa yoga rely heavily on movements that warm the body and create muscular contraction. Sun Salutations, standing poses, arm balances and inversions are some of the many poses and sequences that build heat and vigor. These types of yoga offer considerable benefits as they strengthen both body and mind. However, too much dependence on yang alone might not prepare the practitioner for long sits in the stillness of meditation or inner contemplation that are the deeper aim of yoga.
To differentiate itself from Hatha yoga, Yin yoga uses different names for similar shapes. Paschimottanasa, the “Seated Forward Bend,” becomes “Caterpillar,” Kapotasana, the “Pigeon Pose,” becomes “Sleeping Swan,” and so forth.

While yang yoga focuses on muscular contraction, Yin yoga emphasizes complete muscular relaxation to create a static stretch in the deep layers of fascia that wrap muscle tissues. Over time, the increased stress in those tissues actually strengthens them and optimizes elasticity. According to studies conducted at the Massachusetts Institute of Technology, the tension of these longer, static stretches can help alleviate scar tissue and create overall mobility and flexibility in the targeted areas.

In addition, learning to intentionally sit with some degree of discomfort can train the psyche to find equanimity when things grow uncomfortable in everyday experiences off the mat.

How is Yin Yoga Different from Restorative Yoga?

Both yin and restorative yoga are slow-paced and emphasize stillness, but the objectives of each vary. Restorative yoga aims to down-regulate the nervous system of the body, relieve stress and restore optimal health. With this goal in mind, restorative poses emphasize comfort. Most of the time, props like bolsters, blankets and blocks are used to prop the body into a shape that will relieve tension and promote ease of mind and body.
Conversely, in a Yin yoga sequence, practitioners might be encouraged to explore an “edge”—an experience of what some teachers call “comfortable discomfort.” Bernie Clark, author of The Complete Guide to Yin Yoga, suggests a “Goldilocks” approach, in which practitioners explore intense sensation that is neither too deep nor too shallow. The “just right” sensation in Yin yoga allows awareness yet invites the initial protective response of the muscular tissues to let go. As a result, access can be granted to the denser connective fibers.

Give It a Try!

Use this brief practice at home to explore Yin yoga for yourself. 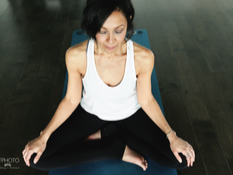 1. Begin in a comfortable, seated position and connect with your breath. Set an intention for your practice, such as, “I create space in my body and mind to fill with the inner light of awareness.” Remain there for two to three minutes. 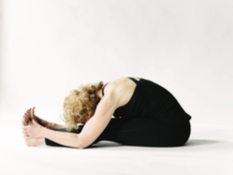 2. Caterpillar: From a seated position with your legs straight in front of you, fold forward, allowing your spine to gently round. Consider sitting up on a folded blanket or two and resting your head and arms on a bolster or cushion. Relax your legs and spine; it’s OK if your legs externally rotate a little when you do this. Hold for five minutes. Lower to your back in a supine position for one minute. 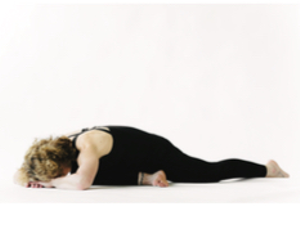 3. Sleeping Swan: Come to hands and knees. Then, slide your right knee to your right wrist with the right foot positioned at the left hip crease. Lengthen your left leg straight behind you. Center yourself so your weight is even and fold forward over your right leg, propping yourself with a blanket or bolster if you like. Hold for five minutes. Lower to a prone position and rest for one minute. Repeat with the left leg forward. 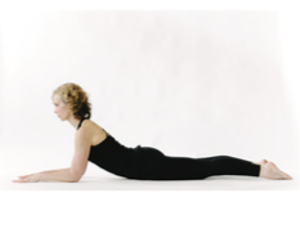 4. Seal: Lie on your stomach, raise your torso and head, and place your elbows under your shoulders. Let your weight rest into your forearms. Allow your lower back to relax, softening your abdomen and thighs. You’re looking for mild compression in your lower back. If you don’t feel this subtle stress, try pressing your palms down and straightening your elbows to increase your spine’s extension. Hold for five minutes, then lower to a prone position for one minute. 5. Child’s Pose: Come to hands and knees. Press your hips towards your heels, bringing your chest towards your thighs and your forehead to the earth. Use a bolster to rest your torso if you need it. Hold for five minutes.

Santosha is an intimate, specialty studio overlooking private woodlands, where every experience is customizable. We foster personal discovery and healing through instruction in movement (yoga), meditation, breathwork, Thai bodywork and more. We host trainings, guest instructors, group events and private staycations to support your journey toward "santosha" - a sanskrit word meaning "contentment...