Due to travel restrictions, tighter budgets and concern for family members that may be older or have underlying health conditions, Thanksgiving might be a smaller affair this year, but that’s no reason to give up on having a scrumptious, celebratory meal. With a little creativity and lots of flavor, our treasured American holiday need not suffer. Giant turkeys may not grace as many tables as usual, so it’s the perfect time to up the side-dish game, embracing healthier options and taking full advantage of an abundant supply of delicious, in-season produce.

To right-size the Thanksgiving spread for carnivores, “Get a Cornish hen or another small bird from a local poultry producer, or consider turkey parts like breasts or thighs, instead of cooking an entire big bird,” advises Steven Satterfield, co-owner and executive chef of the Miller Union restaurant, in Atlanta, and author of Root to Leaf: A Southern Chef Cooks Through the Seasons.
For sides that rate high in both nutrition and taste, the James Beard winner favors in-season veggies like brassicas and Asian greens. “Napa cabbage is great roasted, grilled or prepared raw as a salad. Brussels sprouts shaved on a mandolin and sautéed briefly with shallot and garlic, and dressed with apple cider vinegar and diced apple, is another nice option,” Satterfield says. One of his go-to dishes is a root vegetable salad with shaved celery root, walnuts, apples and dried cranberries with a simple dressing of olive oil and lemon.

Sweet potatoes and pumpkin offer a nutritional edge over white potatoes, giving them top billing at Satterfield’s holiday table. He suggests simplifying the traditional sweet potato casserole by first parboiling, straining, peeling and cutting the potatoes into thick chunks, and then baking with lemon juice, nutmeg and water. “The sweet potatoes will caramelize and form a natural syrup. It has a bright and refreshing flavor without adding the usual butter, marshmallows and sugar,” he explains.

According to Satterfield, many nutritious bitter greens are plentiful this time of year, including chicory, radicchio, frisée and endive. “Last Thanksgiving, I made a chicory salad with dates, pecans, shaved parmesan and persimmon with a sherry vinaigrette with olive oil and shallots. The sweetness of the fruit balances nicely with the bitter greens, which add fiber and help with digestion and the circulatory system.”

Thanksgiving offers a good opportunity to go meatless, according to Kim Campbell, vegan chef and author of The PlantPure Nation Cookbook. “There is a substitute for every animal product out there, so it’s not hard to make traditional recipes plant-based,” says the Durham, North Carolina, native. Her recipe for a nutty or beanie loaf ramps up the flavor and health profiles by using fresh, rather than dried, herbs such as rosemary, thyme and sage, as well as natural binding agents like lentils, flax seeds or chia seeds mixed with water. “Guests will be amazed that whole foods can be so flavorful and satisfying,” she says. “Go the extra mile with quality ingredients for a special meal like this.”

Campbell encourages people to enjoy the abundance of fresh produce and learn how to cook in season. Fruit-based desserts can be a great way to showcase what’s in season and still keep guests light on their feet. “You don’t have to use crust or a lot of added sugar for something like an apple crisp or cobbler,” she says.

Annemarie Ahearn, founder of the Salt Water Farm cooking school, in Lincolnville, Maine, also suggests a healthful rethinking of traditional Thanksgiving dishes. “Instead of a green bean casserole, consider blanched green beans with almond and cranberry. Dried cranberries can go in a salad, rather than a sauce. You can have the same ingredients and keep the same focal point, but use less cream and dairy,” says the author of Full Moon Suppers at Salt Water Farm: Recipes from Land and Sea.

Ahearn, who teaches a class on Thanksgiving cooking, encourages people to take a stroll after the main meal to let food settle before having dessert. She also suggests serving some dishes at room temperature to relieve the pressure of having everything arrive hot at the table. For those unable to be with extended family, Satterfield suggests trading recipes in advance, and then having a virtual Thanksgiving by sharing a visual image of how the meal turned out. “You can even send leftovers if you’re in the same vicinity,” he says.

From the Satterfield Kitchen 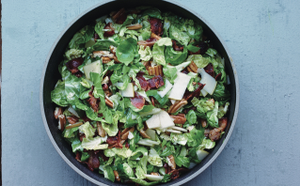 The South has a tradition of making a wilted salad with a dressing made from the fatty drippings of cooked bacon. Although young spring lettuces are typically used for the base, the leaves of Brussels sprouts offer a toothsome texture, especially in combination with other fall flavors. Bosc or Anjou pear varieties are a favorite for this salad.

Heat oven to 300º F. Spread the pecan pieces on a baking sheet and toast about eight minutes until lightly browned and fragrant. Transfer to a dish to cool. In a wide skillet over low heat, cook the bacon until crisped on both sides. Remove the bacon from skillet and set on paper towels. With the heat still on low, add the sage leaves to the bacon fat and lightly fry one to two minutes until crisped but not browned. Remove the leaves and drain on a paper towel. Turn off the heat and allow the fat to cool slightly.

Slice the pear vertically into four equal quarters. Place each quarter, cut side down, with the seeds facing your knife. With your blade at a 45-degree angle, slice away the core and seeds from each quarter. With the core side down, cut each quarter crosswise into thin slices. Place sliced pears in a nonreactive dish with the vinegar and season with salt and pepper. This will keep them from turning brown.

Trim off the stem end of the Brussels sprouts, then pull the leaves apart. Rinse the leaves, dry them in a salad spinner, then roughly chop them. Place in a mixing bowl. Pull the pears out of the seasoned vinegar and set aside. Chop the crisped bacon and set aside. Lightly crush the fried sage and set aside. Heat the bacon fat in the skillet, add the seasoned vinegar, bring to a boil and pour over the Brussels sprouts leaves. Toss immediately and taste for seasoning. Add the pears, bacon and sage and toss well. Sprinkle with toasted pecans and serve.

Preheat the oven to 350º F. Put the whole potatoes in a large pot and cover them with water. Bring to a boil, then simmer for 10 minutes or until the potatoes just begin to be tender on the outside, but not soft all the way through. Pierce with a knife to test for doneness. Drain and allow to cool.

To make the glaze, bring remaining ingredients to a vigorous boil, stirring just until the sugar is dissolved. Simmer for 5 to10 minutes then remove from heat. 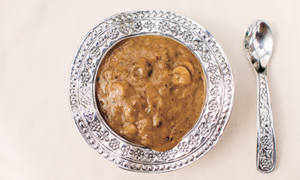 This rich, flavorful gravy is perfect over potatoes and veggie loafs. It’s easy to prepare and inexpensive.

In a large skillet over medium-high heat, sauté rhe cup of the vegetable stock.
Add the garlic, sage, thyme, rosemary, sherry, tamari and nutritional yeast, then continue to sauté for just a minute or two over high heat.
Pour the remaining vegetable broth into a bowl and whisk in the flour until there are no lumps. Add to the pan with the onion and mushrooms. Simmer over medium heat, stirring until the gravy has reached its peak thickness, about 10 minutes. Add salt and pepper to taste. 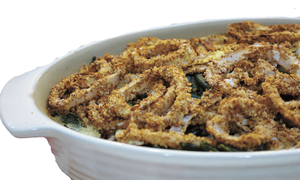 Bread the onion rings by coating them in the flour, the milk and then the breadcrumbs. Several onion rings can be prepared at the same time. Place the breaded onions onto a baking sheet lined with parchment paper or a silicone mat. Bake for 10-15 minutes or until golden brown and crispy.

Place the sauce ingredients into a high-powered blender and blend until smooth and creamy. Set aside. In a large fry pan over medium-high heat, sauté the mushrooms using small amounts of white wine to prevent the mushrooms from sticking. Cook for 6-8 minutes or until tender.

Place the thawed green beans and mushrooms into nine-by-13-inch casserole pan. Pour the cream sauce over the vegetables, distributing the sauce evenly. Top the casserole with the baked onion rings and cover with foil. Bake at 375° F for 20-30 minutes. Remove the foil and continue to bake for an additional 20 minutes.

Chef’s note: You can soak your cashews if you don’t have a high-powered blender for easy blending. This creamy white sauce can be used for scalloped potatoes, creamed corn or even on pasta. 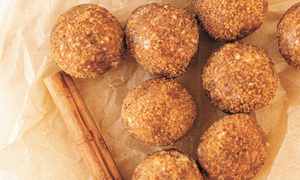 This dish is gluten-free, vegan and paleo.
Yield: 15 servings

Combine the almonds, hemp seeds, coconut, pumpkin pie spice, coconut oil, pumpkin puree and dates in the base of a food processor. Turn the processor on high for about two minutes or until the ingredients are well combined.

Pour the mixture into a mixing bowl and then use your hands to roll the dough into about 15 cookies, each about 1½ inch in diameter.

For the best texture and sweetness, place the cookies in the refrigerator for at least 2-3 hours to chill.

Chef’s notes: Freeze these cookies for up to 2 months in a tightly sealed container. Defrost them in the fridge for about 4 hours before serving. For refined sugar-free servings, leave off the coconut sugar dusting. You can easily double or triple this recipe depending on how many energy bites you need to make.